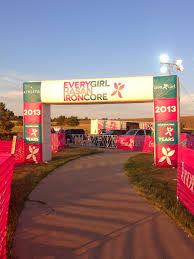 While all of my races this year were Ironman managed events there was one that somehow did not fit the mold and that was IronGirl at Cherry Creek in Aurora, CO.  This sprint distance triathlon was close to home and I anticipated a chance to podium, which were the two primary reasons I had entered.

After Boulder 70.3, I’d come to realize that I actually really LIKE, maybe even PREFER the long course race distance.  Sprints are pedal to the metal for an hour, 1:15 or 1:30 or 2:00 or whatever time it takes you.  Long course races are trying to stay at the top of your aerobic level and are really much more focused on endurance.  Also, I’d come to appreciate and maybe even expect the smoothness of a well run race like those put on by the folks at Without Limits and Ironman.  Since IronGirl was under the Ironman umbrella I expected the same.

Hmmm, my first indication that IronGirl wasn’t “really” an Ironman organized event was when I checked-in on race morning and the body markers put my race number on my arms and my legs rather than bib number on arm and age on calf.  When I mentioned this they were completely unaware of the standard body marking protocol.  Next was the fact that there was not clear marking from swim exit to T1, which I mentioned to the race director who promptly brushed me off saying volunteers would staff.   There was however a pretty clear shortage of volunteers.   Course signage for the bike course were mixed in with general event signs showing parking this way…which would be confusing for anyone that had not ridden the course.

Anyway, for me, none of this presented a challenge since I’d ridden the course many times and on race morning I always walk the swim in, bike out and in, run out to finish.  But…as with most women-only events there are many gals for whom this is their first triathlon and maybe ONLY triathlon.  A goal that they’ve set for themselves, maybe with a group of friends, maybe something to check off of the “bucket list” or maybe a start to a new fitness focused hobby.   It was these women that I hoped were not adversely impacted by the lack of adequate signage or trained volunteers.

My warm up and race proceeded without issue.  I was in the first wave and therefore was one of the first gals out of the water and onto the bike.  During the bike course I noted again the confusing signage and on the run I was shocked that there were no volunteers along the route (except for the aid station), not one volunteer at the turn of the run.  As I ran to the finish I noticed some poor women close to finishing their bike and following the wrong sign which put them into a parking lot versus T2.

After finishing I was SUPER impressed by the breakfast buffet.  Seriously THE BEST post race food of any event.  Fresh, tasty, diverse and high quality.  And, seating included big round tables with linen table clothes.  Very nice.  But I do NOT compete in triathlons simply to eat food at the finish…I can go to a brunch somewhere post race if I like.

As I enjoyed the tasty brunch, the typical camaraderie of women’s races was apparent.  Gals were celebrating their first TRI, others were thrilled with a PR some celebrated a podium position and yet some others were frustrated that they couldn’t locate T1 after swimming or took a wrong turn on the bike course because they followed the wrong sign.  I did give my honest feedback after the race.  Who knows if anyone will listen?  They needed 3 times the number of volunteers, the volunteers needed to be trained, signage needed to be improved…but with some tuning this race can be a wonderful addition to sprint distance events in Colorado.

By the way, I did podium with 3rd place in my age group and got a nice little piece of silver jewelry…but, by now I was a bit distracted as Vegas and 70.3 Worlds was looming large on the horizon.