It is now almost a week since I finished Harvest Moon which is a long course triathlon of the same 70.3 mile distance as a half Ironman.  I needed a bit of time to pass to let my thoughts coalesce.

Here’s a recap–The GOOD, the BAD and the UGLY. 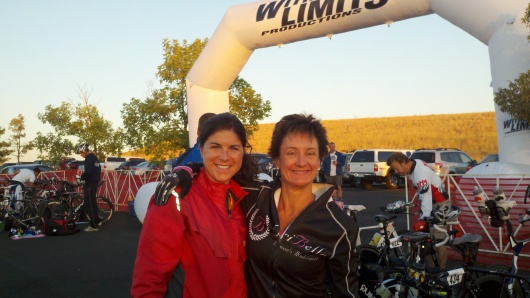 (GOOD) Leading up to the race I followed my plan to a “T”.  I was diligent in my training taper, my nutrition, my hydration, my sleep.  I did NOT cut ANY corners.  (BAD) I was however more than a little nervous and it showed in my less than jovial manner (read bitchy attitude) and churning stomach full of butterflies for a few days prior to race start.

(GOOD) Morning of the race, I followed my typical routine of drinking like a camel and eating my oatmeal, PB&J toast and banana.  I arrived at the transition area when it opened at 6:00 a.m. and secured an ideal spot close to bike start and finish.   I was pleased that my friend and triathlon mentor @KirkMac was there to give me moral support.

After setting up transition items, (GOOD) Heather and I headed out on a brief bike ride and run to warm up.  I then put on my wetsuit and proceeded to complete a short swim, just to get wet and glide through the water.  Time seemed to fast forward at that point and before I knew it Wave 1 which included the old women (a/k/a ME), young women and Elites, was in the water with the countdown underway.

Now, swimming is in my roots.  I spent much of my early years during the summer and through High School in a pool.  Hair that resembled straw as a result of Chlorine was my norm.   I swam competitively and was a strong albeit not super fast swimmer and distance races were my strong suit.  The swim for this event was a 1.2 mile “wish bone” shaped course.  As the horn sounded, I started off using my typical approach of swimming fast for the first 150-200 yards and then getting into a rhythm, I then try to pick up speed a bit on the turn, fall back into a rhythm and then pick up speed again at about the 200 meter to finish point.  (GOOD) My swim start was fine, but, I soon realized I was starting to (BAD) swim off-course, inadvertently adding considerable yardage to my efforts.  After the turn around point, the wishbone swim course format introduced the feeling of swimming head-on into the oncoming swim waves.  Then…after all the yardage I swam in Masters, I got a (BAD) calf cramp in my left leg at about 200 meters from the swim finish; just when I was trying to swim FAST.  I thought, “YOU have GOT to be kidding me!  After all the time in the pool I’m going to get a frick’n leg cramp?!”  SH*T, it hurt too!  So there I was trying to stretch out my left leg by flexing my foot and still kick with my right leg while continuing to swim freestyle.  Not the ideal, most efficient or fastest way to race a swim.  My swim resulted in a time of 38:01 for 1,931 meters.

Running into transition helped me forget my calf issue.  I proceeded through the T1 drill of peeling off my wetsuit and putting on my shoes, helmet, sunglasses etc. as quickly as possible.  In retrospect my (GOOD) transition times were the only area where I actually beat my target goal time!  Hey, ya gotta look for the silver lining somewhere!!

(GOOD) Proceeding onto the bike course went smoothly and the first 25-30 miles of the 56 mile course went fairly easily.  But, the Harvest Moon bike course is deceiving.  (UGLY) The winds and elevation change at around the half way point and really start to wear you down, reducing your speed to maybe half of what it was on the front of the course.  I watched my “Cat-Eye” bike computer average speed slowly reduce as the miles wore on.  I knew that I needed to keep a pace of close to 19 mph to hit my goal time.  (BAD) The wind and strain made my upper body tight and tired.    I was discouraged as I saw that my average speed had fallen below 18 mph.  (GOOD) As I rode into T2 I saw my guys #1 and #2 positioned on a hill cheering me on!  THAT lifted my spirits…thank you GUYS!  Bike leg resulted in a time of 3:16:48 with an average mph of 17.1.

Once in T2 I quickly noticed that the hydration flasks that I’d filled with Infinit liquid nutrition while almost frozen when I arrived at 6:00 a.m. were now (BAD) warm, as in HOT and undrinkable.  That was a bummer as it left my hydration belt worthless.

As I started to run my body, shoulders, back and legs were sore and my spirits were a bit low.  My run goal had been 2:10:00 which equates to a 10 minute mile.  (UGLY) The day was also hotter than expected with temperatures heading up to 90 degrees.  An aide station with water and Gatorade was located each mile and every other aid station also offered food such as bananas, Oreos, pretzels, gels etc.  I had hoped to run between aid stations and walk through them to allow a short recovery.  That lasted until Mile 2.  At that point (BAD) my back and legs were starting to become quite painful in a muscle cramp sort of way.  I started to introduce more walking and less running.  This continued for the next 4 miles with other athletes also walking but many jogging by…with a quick “you’re doing great”.  Which while these words were offered with best of intentions, it made me feel a little like I SUCK!  They’re running/jogging and I’m walking…frick’n WIMP!  Close to the turn around, as this was an out and back  course, (GOOD) I came across a man (Michael) that was struggling as I was and I suggested we do a walk/run combo together.  Running with someone has an amazing effect on your ability to keep moving forward.  What a nice man!  Michael and I continued our walk run combo until mile 11 at which point Michael wanted to run the remaining distance.   As I jogged a little and walked and ran I could see the finish line in the distance.  I had told guy #2 that we should run through the final yards together.  So as I approach I could see my (GOOD) personal cheering squad and little guy #2 was there.  I yelled (or more likely squeaked) for him to run with me and so (GOOD) guy #2 and I ran the final 100 or so yards at an all out sprint. 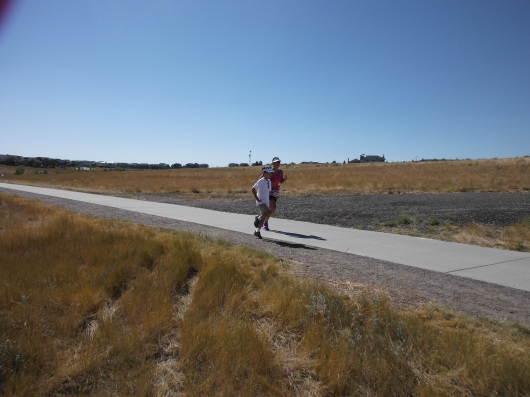 That was the highlight of my day! I heard the announcer proclaim that Alison Kane from Centennial, Colorado had completed the Harvest Moon with a “fast finish”.  (GOOD) No penguin call-out for me on that finish!  Although, in fact, I really did deserve it this time!  With a run time of 3:01:21 with a true penguin pace of a 13:51 minute mile.

(BAD) Unlike when I cross the finish at Sprint or Olympic distance TRI, I didn’t feel that elation of finishing.   I felt a little…empty, discouraged, annoyed.  Where was that endorphin rush, that healthy “high” that I love?  Unfortunately, I had left it somewhere out on the 70.3 mile path to the finish line.

(BAD)  I told guy #1, “THAT was HORRIBLE” please remind me how much I hated this…don’t let me do this again”.  (UGLY) I then got a nasty queasy sorta feeling, something similar to what I vaguely remember from my college party’n days and I had to locate a private spot to address the issue…yes, I did in fact get sick post finish (sorry TMI).

THAT was Sunday afternoon.  (GOOD) And, after two beers, half a pizza, going to bed at 7:45 and sleeping 11 hours…by Monday morning, I had already started to forget, (similar to childbirth I guess) the pain and I was surprisingly only minimally sore.   (GOOD) By Monday afternoon, I looked.  YES,  I looked at possible IM 70.3 races for 2013.  I am a freak…a triathlon addict, maybe I need an intervention or something?!  Truth is, I want to beat my sad little PR for the half Iron distance of 7:00:58.

And so ends my triathlon season for 2012.  And, (GOOD) YES! I will be sporting a 70.3 car magnet.  Slow, maybe, but a FINISHER never-the-less which is truly AWESOME!